Our recent newsletter about street art tours has sparked a lot of interest based on the feedback, and since this topic is close to our hearts, we decided to list our team’s personal favourites. The list includes both popular downtown tourist areas and more secluded, lesser-known sites. Historical events, social issues or iconic Hungarian tales? We can put together a personalized tour for any theme!

This painting is located in the downtown party district of Budapest, on the wall of a house with a tailor’s shop in its basement since 1926. This painting and location is very close to my heart because I lived in the opposite apartment for years, many of my clothes were repaired in this excellent sewing shop and I also went to my wedding from this house. 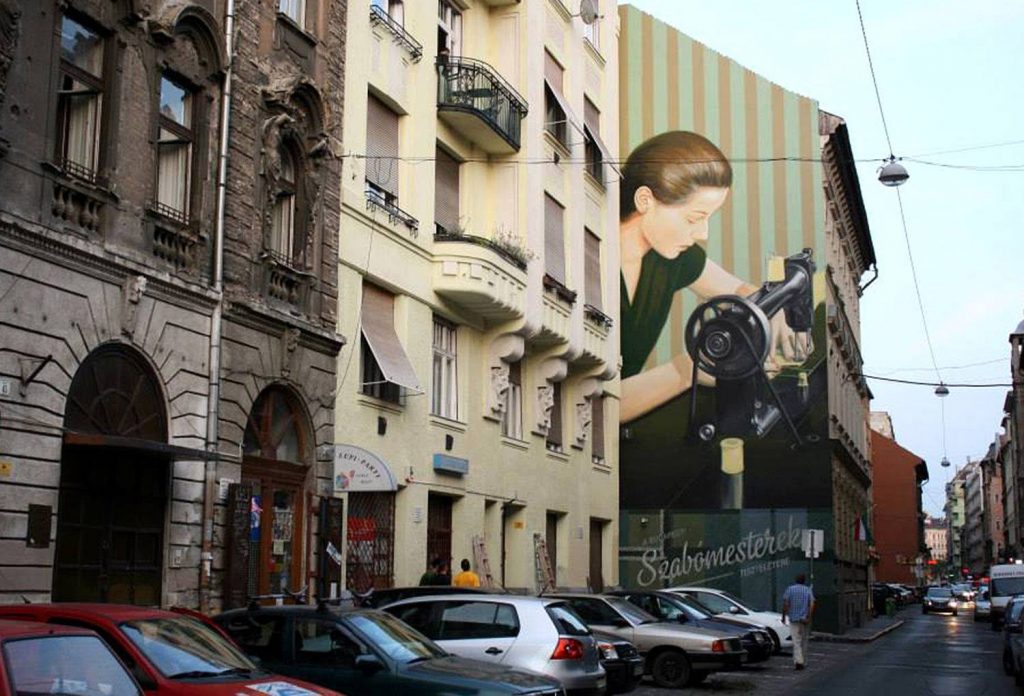 In recent years, we can find more and more of Mihály Kolodko’s special, barely 15 cm big, bronze mini-statues on the streets and public spaces of Budapest. One of my favourites is the statue of Mekk Elek – one of the immortal figures in the history of Hungarian puppet film -, which stands on Széll Kálmán Square in Buda. This sculpture and the fairy-tale character depicted is dear to me for several reasons. The protagonist of the story is a goat, Mekk Elek or Mekk Master, who pretends to be a handyman, but in fact doesn’t know anything. The story is written with funny, sarcastic humour. The writer, József Romhányi is a great favourite of mine who was immortalized by his inimitable rhymes, playfulness and humour. We owe him a number of excellent poems, film scripts and cartoons. The location of the statuette is also close to my heart, as I grew up near the square, and my meeting place was there with my schoolmates. 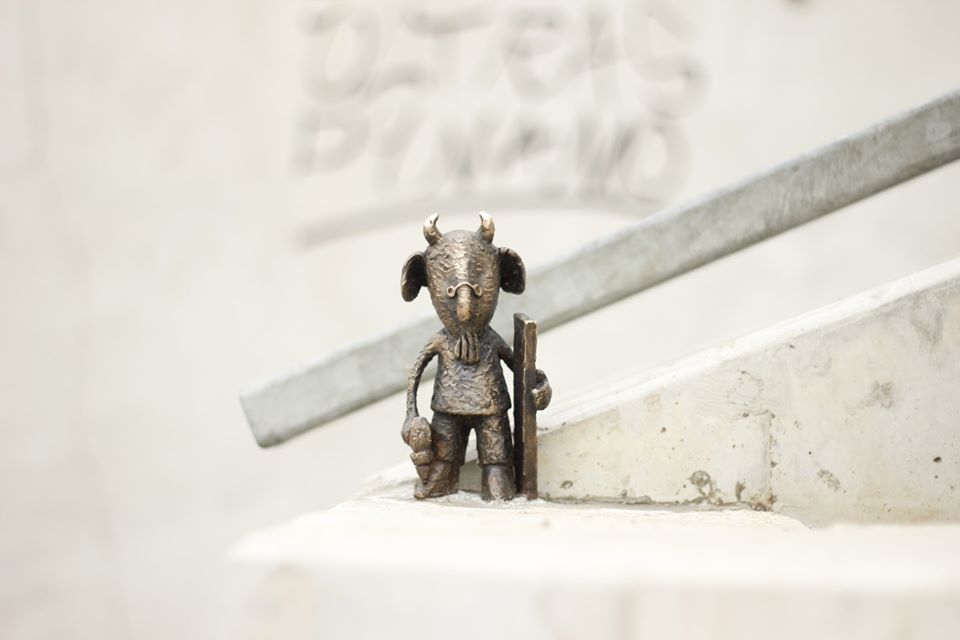 The special work I chose commemorates the Angel of Budapest. Spanish diplomat Ángel Sanz Briz served in Budapest during World War II. According to sources, he helped thousands of Jews by issuing them a Spanish passport after the German occupation. In some cases, he also rented houses in Budapest at his own cost. His trick was to ask the Hungarian state to give passports to 200 Sephardic Jews, and when he received the permit, he changed it to 200 families. 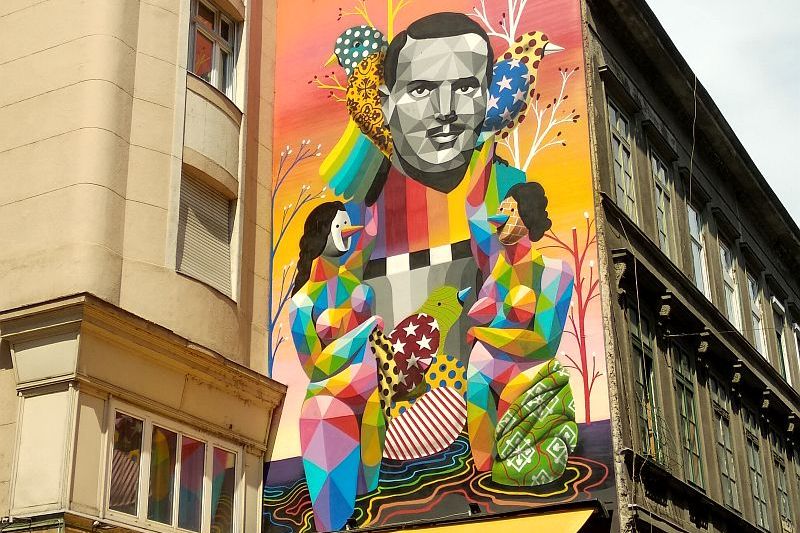 Főkukac is an emblematic worm from the brilliant TV-series ”Nagy-Ho-Ho-Horgász” (about an angler and his bait). The worm is a sarcastic, but – at the same time – very realistic figure; that’s why he was my favourite character. This was one of the first mini-statues of Mihály Kolodko in Budapest. To meet the ”Főkukac”, you need to step away from the area where tourists normally flock, but it worths the walk. The view of the Parliament is just perfect from there. Below, you can see my own favourite photo of the Főkukac with the blurred Parliament in its backdrop. Would you like to take a similar shot? 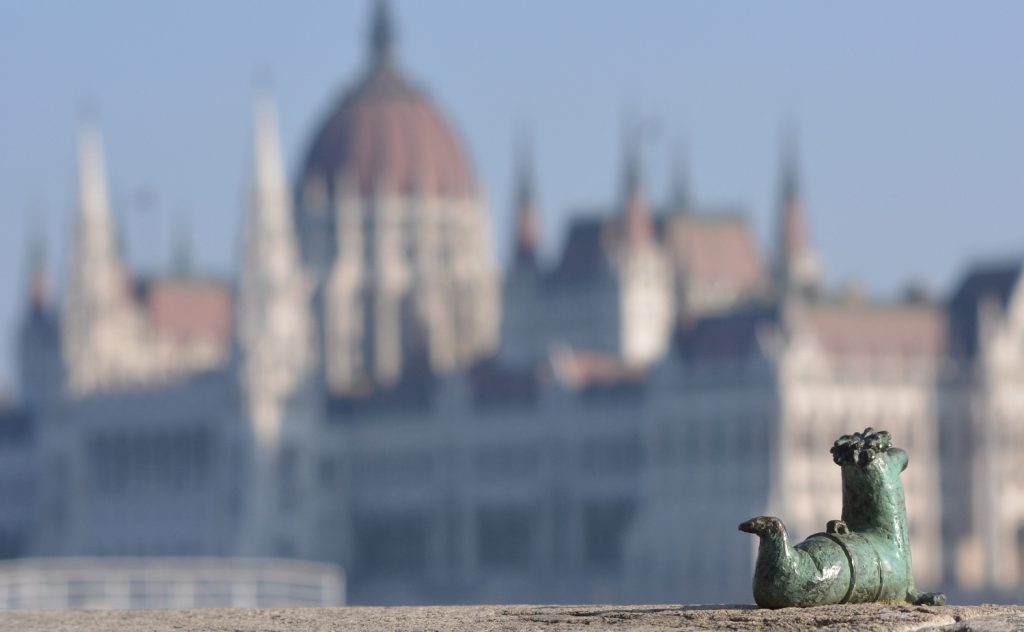 My favourite mural in Budapest is the 40-year-old Rubik’s Cube, which adorns one of the firewalls of Rumbach Sebestyén street. By depicting the 250 m2 Rubik’s Cube, the artists have done a very meticulous job: if we look up close we only see coloured circles, but if we go a little farther, we will see cubes drawn from the circles. And why this cube? Maybe because it was one of my favourite games in my childhood – although I never managed to unload it because I always gave up – and because it is one of the symbols of Hungarian creativity for me.

Fabianna – The diver with the key of New York Café

The statue is located at the intersection of Dohány street and Osvát street. It refers to one of the urban legends, which sounds like this: after the opening of the New York Café Ferenc Molnár – a prominent Hungarian writer – threw the café’s key into the Danube, so that it would never close. The café evokes the golden age of culture, literature and the Budapest urban lifestyle. Inspiration from the good old days! 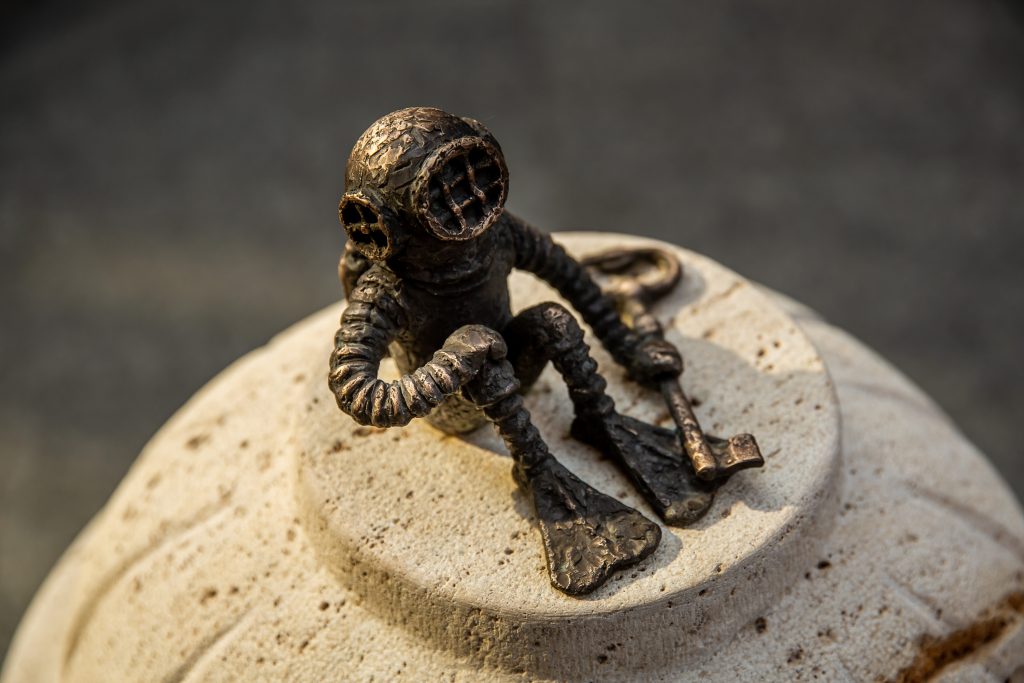 One of my favourite street art scenes of Budapest is the so called ”Landscape” in the very center of the ruin bar area, in Jewish quarter. Over the last few years, a street art revolution has been taking place in Budapest, with empty building façades being turned into works of art and modern murals joining statues and installations in making up part of the city’s artistic landscape. Besides the many street art scenes, this was one of the very first ones, therefore it still stands close to my heart. Thanks to Neopaint Works – a group of street and graffiti artists – I have always been proud to show around our clients during site inspection visits, and to see the ”wow feeling” on their faces. I am sure these street art scenes helped us as well to win the game and competition between destinations. 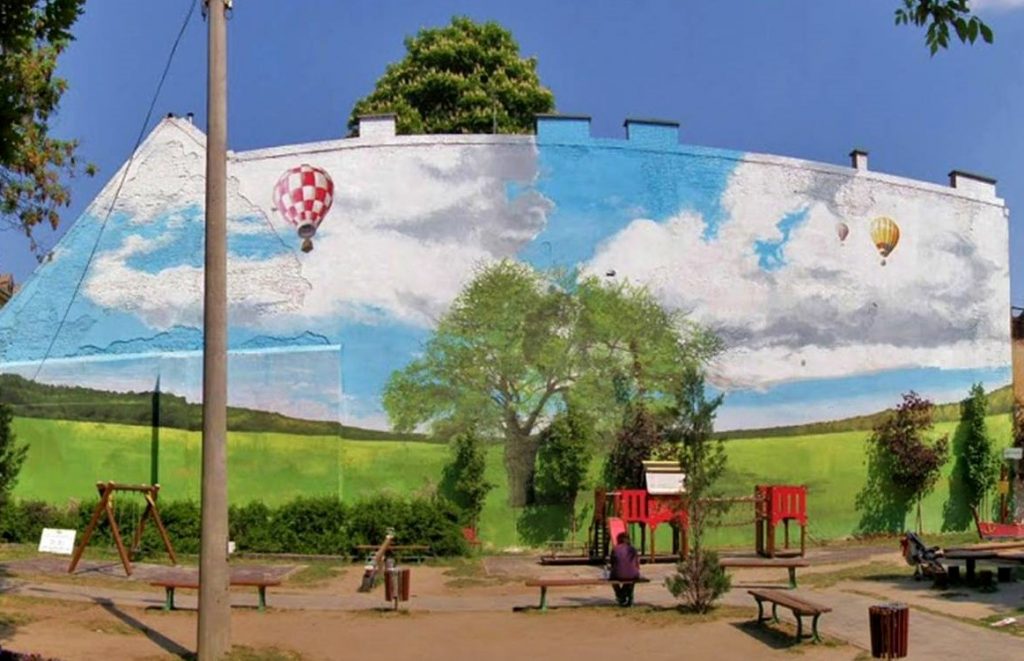 My personal favourite is the huge – 600 square meter – firewall painting in the Szigony Street housing estate, depicting the heroes of the legendary Hungarian animated film, Cat City, released in 1986. I especially like this work because it is a bright spot in the gray-brown tower blocks (”panel” in Hungarian). In this part of the Eighth District of Budapest you can find old eclectic tenement houses, unimaginative panel blocks, but also the newest and most modern infotech park right next to each other, and this painting makes it even more diverse. This area is not one of the city’s classic tourist attractions, but it can be exciting if you want to go off the beaten track! 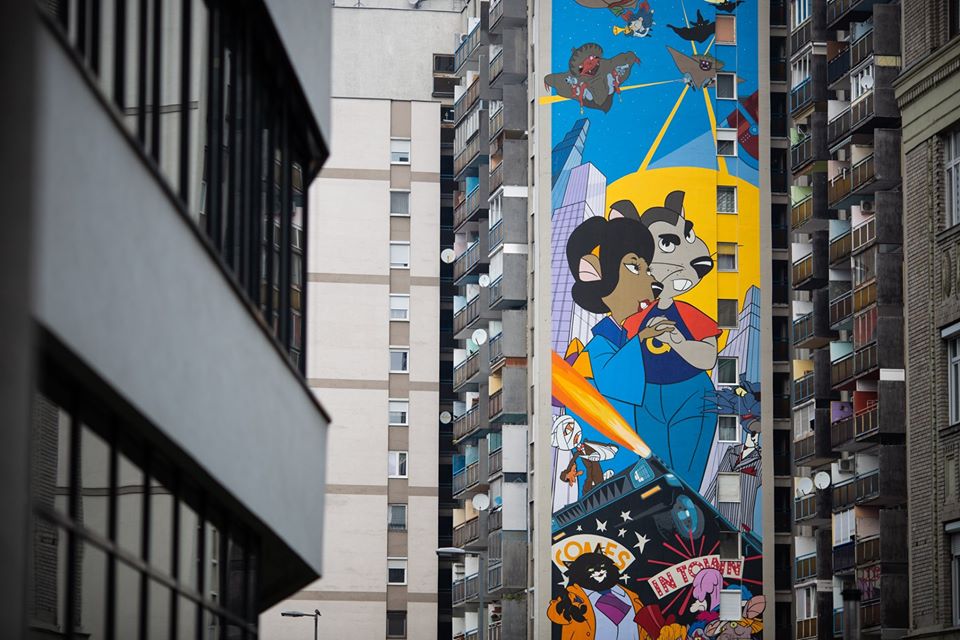 My personal favourite is located in a downtown street. It depicts a gray cattle with a shadoof, and it represents the contrast of the countryside vs. metropolitan life. The image takes a little rural vibe into the bustling big city, making you wonder for a moment where you can really find what you want? In an always-vibrant metropolis or in the serene harmony of a close-to-nature countryside. Sometimes it is worth visiting the iconic landscapes of our country, for example the famous Hortobágy, which – even if only for a day – will surely break the everyday monotony and recharge your batteries. The painting is also spiced up with a bit of humour, I think it is definitely worth a visit as part of a street art tour. 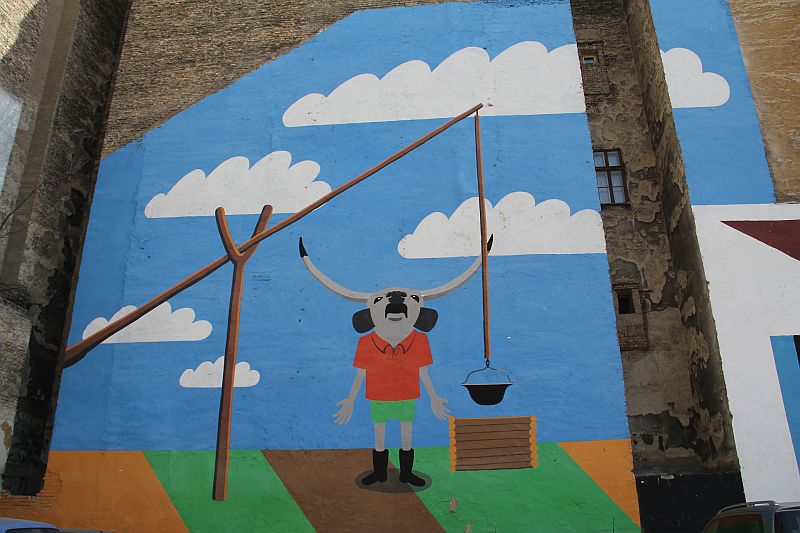